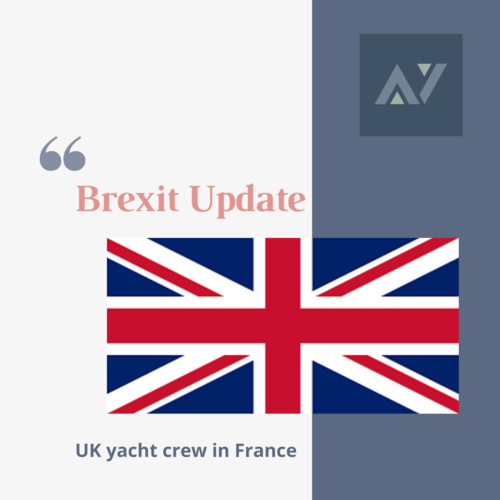 Four years ago, the UK voted to leave the European Union and since then there has been conflicting information concerning travel and immigration regulations for British yacht crew in France, as well as VAT on yachts post-Brexit.

However, for yacht crew who hold a British passport and are not French residents there are considerations.

British Yacht Crew travelling between the UK and France

An extension bulletin has detailed that seafarers are exempt from restrictions.  For travel from the UK to France, it is recommended that yacht crew carry the following documentation:

You can be denied passenger boarding for your flight if you can’t provide verification of a negative PCR test taken within 72 hours of travelling.  Don’t attempt to travel without an up-to-date test.

It is recommend that all crew have travel letters for their journey in English and French. BWA Yachting can provide this documentation for you, which crew have found useful for check-in procedures, boarding and clearing through passport control.  Contact them via www.bwayachting.com

Brexit:  Stamping in and out procedure for yacht crew

Since Brexit is now in effect, British crew (who are not French residents) needing to fly out of France will need to stamp IN prior to travelling.

As well, crew will now need to stamp OUT when joining a yacht in order to ‘freeze’ the number of days they are permitted to be in the Schengen Zone; currently 90 days of stay within any 180-day period.  Additionally, please note the rules when a third country national (non EU/EEA) is stamped OUT:

A reminder of where to go for the stamping.

What is the Schengen Area?

The Schengen Area is a zone that consists of 26 neighbouring countries which have abolished passport and all other types of border controls at mutual borders. There are effectively no hard borders between the participating countries, only a singular, shared border.

Note:  I am trying to verify that Gibraltar is also considered part of the Schengen since 1st January 2021, to be advised.

The PYA is hosting a webinar on the latest ‘Brexit Regulations for Yacht Crew’.   It will take place on Tuesday 12th January at 2pm CET.
Speakers include:
Topics:
To register go to: https://us02web.zoom.us/webinar/register/WN_NQuQuCu_TKyElN7YxqRhXQ?fbclid=IwAR3I_9Ltlxzx-3vfoWsf6L7GNKvFourpETrBWOI1TDxMZ31ekHc7EYq6JoI

Hot off the press: German shipyard Nobriskrug has